Posted on July 8, 2018 by Bookmark Chronicles 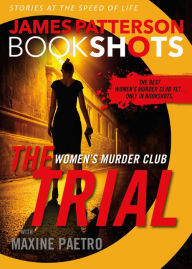 “I’m not on trial. San Francisco is.”

An accused murderer called Kingfisher is about to go on trial for his life. Or is he? By unleashing unexpected violence on the lawyers, jurors, and police involved in the case, he has paralyzed the city. Detective Lindsay Boxer and the Women’s Murder Club are caught in the eye of the storm.

Now comes a courtroom shocker you will never see coming.

I really loved this novella and I know that most people don’t think that novellas are a core part of the story but I always read them.

First I have to say that I’m glad that they actually finished the Kingfisher story line because the way that he just disappeared did not sit right with me. It seemed suspicious.

I was really shocked when one of the jurors ended up dead but even more so when the ADA was murdered. I guess it was to prove a point but wow. And the night before the trial.

I knew that it had to be Elena that killed him. It made sense, especially after she revealed that he branded her. I was kind of surprised that she did it to regain control of the drug trade BUT it makes sense since her father was the original kingpin before Kingfisher took over.

This was a good read and I’m glad that they used it to tie up a loose end.