Book Review: Fool Me Once

Posted on April 5, 2017 by Bookmark Chronicles

Fool Me Once by Harlan Coben 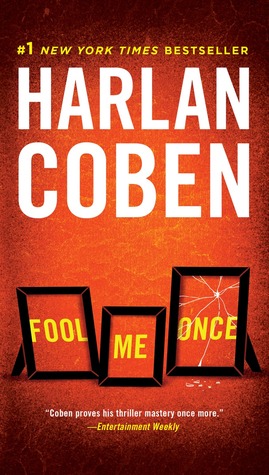 Former special ops pilot Maya, home from the war, sees an unthinkable image captured by her nanny cam while she is at work: her two-year-old daughter playing with Maya s husband, Joe who was brutally murdered two weeks earlier. The provocative question at the heart of the mystery: Can you believe everything you see with your own eyes, even when you desperately want to? To find the answer, Maya must finally come to terms with deep secrets and deceit in her own past before she can face the unbelievable truth about her husband and herself.

Originally I wanted to do a spoiler free review, but I can’t. I have too much to say about this.

To start, this was my first read by Coben and I did like it very much. It was a good read, kept you interested and all that. This is technically like only the second “mystery” that I’ve read in recent years so I feel that it was well done. If you’re a mystery person feel free to leave me some recommendations!

Okay where do I even start?

I guess I started to ask questions when Maya was giving her statement to the detective. If this was a robbery, it didn’t quite make sense to me that she got away. Instead of shooting Joe three times, I feel that a robber would have shot both of them you know? Also, were any of his things taken? I don’t remember.

Then when Maya saw his face on the nanny cam, I figured either he faked his death or she was hallucinating. I was leaning toward him faking his death because I believed that she didn’t witness the kill shot (even though the story was still weird), Caroline made up that stuff about not seeing her brothers’ bodies, and because Isabella stole the nanny cam footage.

I got tripped up when they said the sane gun killed both Joe and Claire. I didn’t yet know about Maya’s secret compartment so when her gun was tested, I didn’t suspect Maya.

I also believed Caroline about the payoffs to the Detective who’s kind of an asshole by the way.

Anyway, I started to get suspicious when we got to the part about Theo dying and his father thinking Andrew was guilty instead of grieving.

I knew that Joe killed Tom Douglass when they found the blood in Maya’s car. When Maya pulled out the unregistered gun I knew that she killed her husband because he killed her sister. I get it. Avenging your only sibling and all that. Using the nanny cam to take the Burketts down. I understand. What I don’t get is leaving your two year old daughter orphaned.  Granted, Shane said she doesn’t remember her and she knows the truth and all but still. Her father killed her aunt, her mother killed her father, and her uncle killed her mother. That’s a lot.

Also, it bothers me that this whole time she knew that her husband killed her sister. She knew from the gun. She had been overseas at the time and she could have gone to the police and had them run a ballistics test. Then again, the family has covered up his murders before so she could have possibly ended up dead anyway.

Aside from the ending this was pretty good.

1 Response to Book Review: Fool Me Once