Posted on July 8, 2019 by Bookmark Chronicles

The Unhoneymooners by Christina Lauren 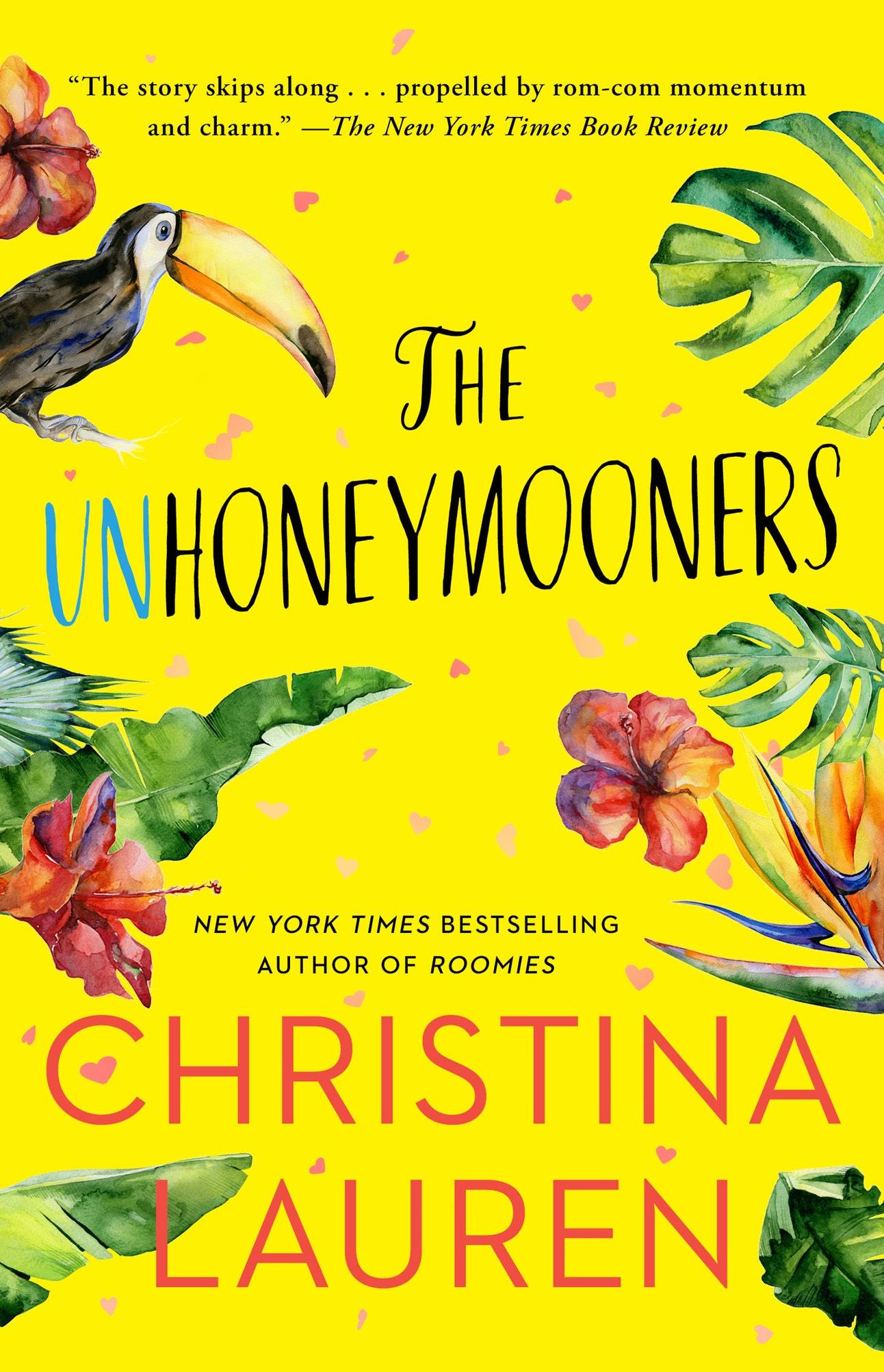 Olive is always unlucky: in her career, in love, in…well, everything. Her identical twin sister Ami, on the other hand, is probably the luckiest person in the world. Her meet-cute with her fiancé is something out of a romantic comedy (gag) and she’s managed to finance her entire wedding by winning a series of Internet contests (double gag). Worst of all, she’s forcing Olive to spend the day with her sworn enemy, Ethan, who just happens to be the best man.

Olive braces herself to get through 24 hours of wedding hell before she can return to her comfortable, unlucky life. But when the entire wedding party gets food poisoning from eating bad shellfish, the only people who aren’t affected are Olive and Ethan. And now there’s an all-expenses-paid honeymoon in Hawaii up for grabs.

Putting their mutual hatred aside for the sake of a free vacation, Olive and Ethan head for paradise, determined to avoid each other at all costs. But when Olive runs into her future boss, the little white lie she tells him is suddenly at risk to become a whole lot bigger. She and Ethan now have to pretend to be loving newlyweds, and her luck seems worse than ever. But the weird thing is that she doesn’t mind playing pretend. In fact, she feels kind of… lucky.

Bria and I decided to try out a romance novel. She’d heard about this one and thought it might be good because it falls into the enemies-to-lovers trope which we both enjoy.

I have to admit, this book was so much better than I expected!

I did have a few issues with it in the beginning because I didn’t appreciate how the one Black character just has to have braids and a gold tooth. Like okay sure the DJ can be Black, but you could have left it at that.

I also didn’t like Diego’s first introduction. You do not have to announce that a character is gay as soon as they enter a scene. Just let them be gay.

I don’t have any strong feelings toward Ami, but it pissed me off when her first instinct was to assume that Olive was lying about Dane because she was jealous. Did Olive need a reality check? Yes. Did she need to hear from someone she loved that it was time to get her shit together? Absolutely. However, she could have still gotten it from her sister without Ami being such a bitch about it. I know for damn sure that if my sister tells me I’m being cheated on, I’m going to believe her. Especially if it came from that piece of shit’s own brother.

Ami is pretty badass for inviting the girlfriends over though. I will give her that.

Anyway, I appreciated the way that Ethan and Olive’s relationship grew, it was definitely a slow burn…well sort of. They’ve known (and hated) each other for years and then that goes out of the window after like 4 days but still, much better than instalove.

I love the name game that they play with each other and that Olive makes HP references. I think it’s kind of funny that their relationship was basically a huge misunderstanding. Kind of how in high school a lot of girls become friends and then are like “When we first met, I thought you didn’t like me.”

I can understand why Ethan wanted to believe his brother was a good person but at the same time, how can you be so blind? What kind of asshole hits on his sister-in-law/brother’s girlfriend. That’s over the top for someone to try to make up.

I also feel like maybe Mr. Hamilton didn’t have to fire her on her first day. Like, make her prove that she’s a good person maybe? Then again, yeah Olive could have come clean much sooner.

Either way, this is a really cute story, I enjoyed it.

1 Response to Book Review: The Unhoneymooners