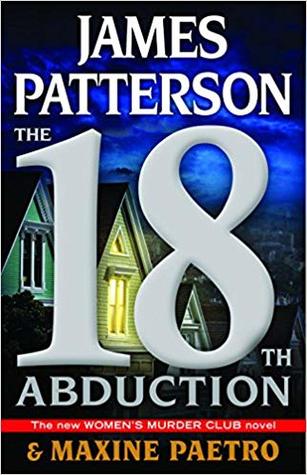 Three female schoolteachers go missing in San Francisco, and Detective Lindsay Boxer is on the case-which quickly escalates from missing person to murder.

Under pressure at work, Lindsay needs support at home. But her husband Joe is drawn into an encounter with a woman who’s seen a ghost–a notorious war criminal from her Eastern European home country, walking the streets of San Francisco.

As Lindsay digs deeper, with help from intrepid journalist Cindy Thomas, there are revelations about the victims. The implications are shocking. And when Joe’s mystery informant disappears, joining the ranks of missing women in grave danger, all evidence points to a sordid international crime operation.

It will take the combined skills of Lindsay, Joe, and the entire Women’s Murder Club to protect their city, and themselves, from a monster.

This was a weird one for me. The fact that 99% of this story is a flashback is strange. They’ve never done that before and it kind of feels out of place. I had to keep reminding myself that it was a flash back because for the first 200 pages I was wondering where Lindsay and Joe’s baby was, but at this point she didn’t even exist.

Flashback or not, there are a few things that Patterson/Paetro need to stop doing. Stop having Lindsay refer to Cindy as “girl reporter” that shit was never cute and honestly it makes no sense. Women as reporters is no longer uncommon. And considering all of the sexism that Lindsay had to face as a cop, why would she add to Cindy’s struggle?

Also, the narrative that Carly was a teacher and therefore a “good girl” is really fucking annoying. Like, “Carly? A sex worker??? It can’t be!” Bitch, do you know how much teachers make? Do you know how much of their own money they have to put up? If you know then you can’t be surprised that Carly and Susan were turning tricks.

I feel for Anna and everything that she has been through. However, the way she got mad at Joe for 1. following protocol  and 2. trying to protect her really pissed me off. This man found you on the street,, listened to your story, took it to his boss and got approved to make the case even though he had no evidence. At the very least, you could stay out of his way and listen to what he tells you. He is FBI for fucks sake. You had already gotten caught spying on Petrovic twice, why would you keep doing it. I hate that she got kidnapped again but Joe really was trying to help her when he told her to back off.

I felt like the ending was a little rushed. They finally, miraculously get a break in the case and Marko tells them where the girls are the very next day? Seemed like they were just running out of time. Also, it was never confirmed that Petrovic killed Denny, or why…

Petrovic committing suicide in the courtroom was not surprising but it was cowardly. I would normally never say that regarding suicide but Petrovic literally just didn’t want to answer for his actions. He literally raped hundreds, murdered thousands and had the nerve to be angry that he got caught. Some men really think that they are fucking high and mighty. It’s disgusting.

So while I was reading this one, I got an email that book 19 comes out in October. I’m surprised because these are usually released in April but…here we are. Hopefully that one is better because the last two have felt off.