The 17th Suspect by James Patterson and Maxine Paetro 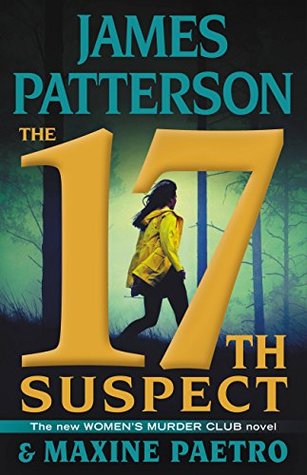 A series of shootings exposes San Francisco to a methodical yet unpredictable killer, and a reluctant woman decides to put her trust in Sergeant Lindsay Boxer. The confidential informant’s tip leads Lindsay to disturbing conclusions, including that something has gone horribly wrong inside the police department itself.

The hunt for the killer lures Lindsay out of her jurisdiction, and gets inside Lindsay in dangerous ways. She suffers unsettling medical symptoms, and her friends and confidantes in the Women’s Murder Club warn Lindsay against taking the crimes too much to heart. With lives at stake, the detective can’t help but follow the case into ever more terrifying terrain.

A decorated officer, loving wife, devoted mother, and loyal friend, Lindsay’s unwavering integrity has never failed her. But now she is confronting a killer who is determined to undermine it all.

I am finally caught up. While I do feel like this is an accomplishment, the release date for 18th Abduction is in April of next year so I have a bit of a break before I’ll be back in.

The guy who was killing homeless people while searching for his mother was unexpected. I can understand being upset that she didn’t give him the attention he needed but going out and murdering a bunch of people doesn’t really seem like the best way to handle that.

Yuki’s case was an interesting one. Sexual assault is already a topic that is often swept under the rug, especially assaults against men. I really wanted Mark’s story to be true because it would have been great for an author as prominent as James Patterson to draw attention to that particular topic, but unfortunately that wasn’t the case. The fact that he lied because he simply didn’t like Brianna and wanted revenge is a very true testament to toxic masculinity so I guess that’s something.

I am glad that Yuki and Brady worked everything out but as I have said before, I hate Yuki’s narrative as a woman who can’t be happy without a man. It annoyed me that her first thought was that she wasn’t enough for him. It’s possible to have multiple women as protagonists and for all of them to be strong.

I feel like Claire and Cindy were very low key in this one which isn’t common. I just feel like they weren’t around as much as usual.

I knew that Lindsay’s sickness was coming back. I wonder how that will play out for the remainder of the series. Although we didn’t get to the part with her telling Joe, it was really nice to see Linds and Jacobi together again.

I’m really hoping that this series comes to an end at 20…maybe 25. It has to stop at some point and there’s always mention of Lindsay losing her job, or dying, or whatever so I wonder how that will actually happen.