12th of Never by James Patterson and Maxine Paetro 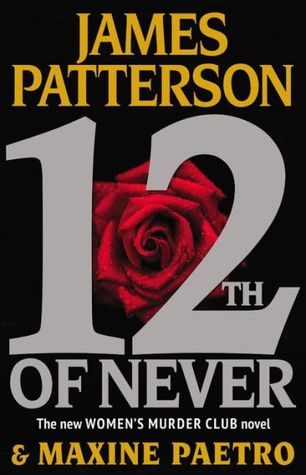 It’s finally time! Detective Lindsay Boxer is in labor–while two killers are on the loose.

Lindsay Boxer’s beautiful baby is born! But after only a week at home with her new daughter, Lindsay is forced to return to work to face two of the biggest cases of her career.

A rising star football player for the San Francisco 49ers is the prime suspect in a grisly murder. At the same time, Lindsay is confronted with the strangest story she’s ever heard: An eccentric English professor has been having vivid nightmares about a violent murder and he’s convinced is real. Lindsay doesn’t believe him, but then a shooting is called in-and it fits the professor’s description to the last detail.

Lindsay doesn’t have much time to stop a terrifying future from unfolding. But all the crimes in the world seem like nothing when Lindsay is suddenly faced with the possibility of the most devastating loss of her life.

This was a wild ride. Maybe one of my favorites in the series so far.

I’ll start with the Faye Farmer case. It was an interesting one for sure but I’m kind of annoyed that we never get all of the details or a confession from her killer boyfriend. Also, we never found out if the motive was indeed because she was pregnant. I don’t like being left with questions! Maybe the trial will come up in the next one?

The Herman case was also interesting. It was obvious that he killed his wife, but like, why not just divorce her and get custody of Lily instead of killing her, going to jail, and leaving Lily? Maybe that’s too rational though?

The case with the professor was super interesting. I still don’t understand how or why the dreams were so vivid or if Mackie put him up to it. I was surprised to find out that she was the killer though. I was even more surprised to learn that she was in love with a psychopath and that they had a son together. Since she escaped, I assume that she will return in the next book. I think it’s funny how she played the shit out of Richie though.

Speaking of, I really hate Richie right now. He had no right to get mad at Cindy just because she didn’t tell him that she was going out. She doesn’t need his permission. The way he showed up at Susie’s and aired their dirty laundry in front of her friends was completely unacceptable. Cindy shouldn’t have to choose between him and her job. He should have been more supportive. The fact that he couldn’t just end it and made her do it just proves that he’s a coward. I’m also really tired of reading and watching men in relationships try to force women to give them children. I understand that having children is something that a lot of people want, but that doesn’t mean that you’re entitled to it. Especially if you’re not the one who has to carry and give birth. That was a conversation that they should have had beforehand yes, but Richie should have asked her instead of just assuming that was the route that they were going to take.

I felt so bad for Lindsay and Joe when they thought that Julie had cancer. That’s gotta be one of the worst things that you could ever experience. I’m glad it was a false alarm though. I’m interested to see how things work out for them with Joe losing his job and everything. I know that Linds was occupied with other things but I find it weird that she didn’t comment on Rich and Cindy at all in this book. That’s not like her.

I hope that Claire is going to be reinstated as Chief ME since they found Faye’s body. It’s not like any of it was her fault after all.

This was a good one.