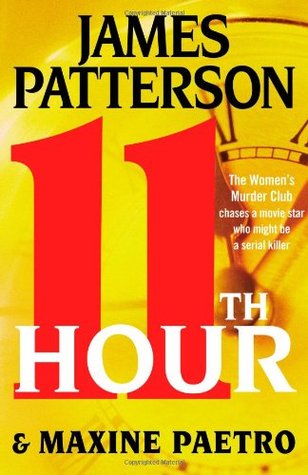 Lindsay Boxer is pregnant at last! But her work doesn’t slow for a second. When millionaire Chaz Smith is mercilessly gunned down, she discovers that the murder weapon is linked to the deaths of four of San Francisco’s most untouchable criminals. And it was taken from her own department’s evidence locker. Anyone could be the killer – even her closest friends.

Lindsay is called next to the most bizarre crime scene she’s ever witnessed: two bodiless heads elaborately displayed in the garden of a world-famous actor. Another head is unearthed in the garden, and Lindsay realises that the ground could hide hundreds of victims.

A reporter launches a series of malicious articles about the cases and Lindsay’s personal life is laid bare. But this time she has no one to turn to – especially not Joe.

I really love this series but at the same time, there are little things that really bother me and I have to remind myself that these books were written years ago.

At this point, I’m really starting to hate Yuki’s narrative. She’s the girl who never had happiness until a man came along and it’s fucking annoying because she’s sooo much stronger than that. Falling in love is fine, it’s great. But Yuki is being written like that’s the only important thing in her life.

I also hate that Cindy was used to portray the notion that women with children can’t keep up with everyone else. *insert strong eye roll here *

I really love that Jacobi walked Lindsay down the isle. It’s so fitting. I hate that she didn’t know her dad died though. They also never really got into that so I wondered what her sister said, if the funeral had already passed or if it will be addressed in the next book.

I’m so glad that Jason Blayney will only be in this book. He is a snake. For a second I even wondered if he were the killer, but I don’t think he’d have the stomach for it. Blayney is obviously a villain in this situation but the fact that he literally stalked Lindsay and she still agreed to have lunch with him pisses me off. First and foremost, no one in their right mind would do that. Secondly, it sends a bad message.

I cannot believe Brady thought that Jacobi could be Revenge. What the hell? That was just ridiculous.

I totally understand why Randall did what he did, but he went about it the wrong way.

I knew that Joe wasn’t cheating on Linds, but I understand that she could think that with the way that whatever her name is went about it.

It took me a long while to realize that the daughter was the killer. For some reason I just didn’t suspect her because I didn’t think that she had motive. I honestly thought that maybe it were her dad since he obviously hated Chandler and he had slept with his wife.

This was a pretty good one. Maybe one of my faves.