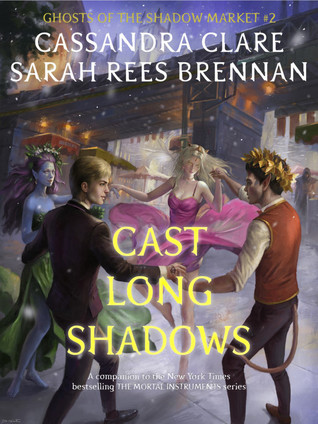 Matthew Fairchild is the Consul’s son and the golden-haired boy of the Nephilim. He has the love of his family and his parabatai James Herondale, and nothing to wish for, except excitement and artistry and beauty that do not seem to fit in with a warrior’s way of life. Matthew gets more than he bargained for at the Shadow Market, where he commits the greatest sin of his life – something he can never tell his parabatai, or any of the honorable Shadowhunters around him.

~ This review will contain spoilers for Cast Long Shadows as well as The Infernal Devices, The Mortal Instruments, and the Shadowhunters television series ~

It’s been awhile since I read The Infernal Devices so it’s nice to catch up with Charlotte’s family.

I want to know more about why James Herondale has demon blood? That was unexpected and I can’t wait to find out more.

I was surprised that Alistair Carstairs was such a little asshole but he and Jem aren’t close so that makes it more believable. I immediately knew that the rumor he was trying to spread about Charlotte and Gideon wasn’t true though. Gideon was so infatuated with Sophie, there’s no way he would cheat on her.

I was surprised to find out that Charlotte was pregnant again though. It’s sad that the baby didn’t live and know Matthew will blame himself  forever.

One of the things that I was curious about while reading the two previous series was that there were never any women parabatai duos. I’m hoping that eventually we see more of Lucie and Cordelia as some point though.

I liked the ending because it was really nice to see Will and Jem together again even though he’s a Silent Brother now.

I did feel that the beginning was really, really slow but it pulled though in the end.