Posted on April 29, 2018 by Bookmark Chronicles

The 9th Judgement by James Patterson 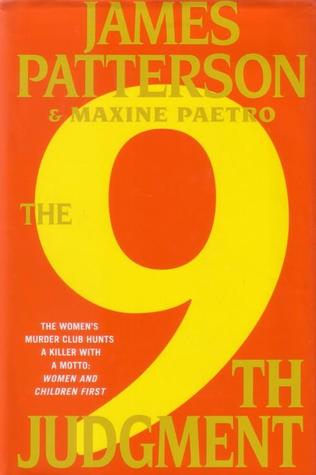 A young mother and her infant child are ruthlessly gunned down while returning to their car in the garage of a shopping mall. There are no witnesses, and Detective Lindsay Boxer is left with only one shred of evidence: a cryptic message scrawled across the windshield in bloodred lipstick.

The same night, the wife of A-list actor Marcus Dowling is woken by a cat burglar who is about to steal millions of dollars’ worth of precious jewels. In just seconds there is a nearly empty safe, a lifeless body, and another mystery that throws San Francisco into hysteria.

This was a really good one. I liked all three cases and how they ended up being interconnected at the end.

I was about halfway in when I realized that Heidi’s husband was the killer. Funny how she ended up being the link in two criminal cases and had no idea it was even happening.

I was surprised that Marcus Dowling really thought that he could get away with murder. Then again, I guess it was going pretty well for him for a while though. I wonder what happened to his girlfriend.

Anyway, kudos to the mom who took down the killer!

In all honestly though, as much as I enjoyed this book, the most intense and exciting part was the freaking epilogue. I really thought that Joe was dead and I was so sad because Lindsay has already been through that once. Thank goodness he’s alive! I wonder though if Lindsay is pregnant, I feel like that’s going to happen sooner or later. Not sure how I feel about it but we’ll see.

I’m also curious to know if Lindsay will be lieutenant again.