The Rose & the Dagger by Renee Ahdieh 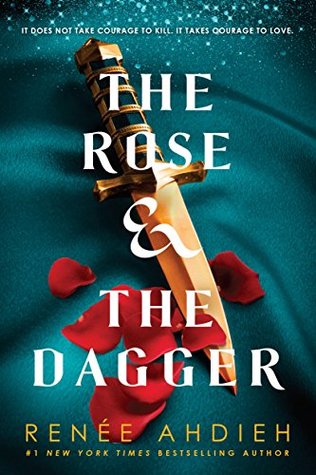 Shahrzad thought she was on the right side of the war.

That was until she discovered the man she married – the man everyone believed to be a murderous king – was actually plagued by a powerful curse.

Now, torn from her husband, Khalid, and taking refuge with her family among his enemies, Shahrzad finds herself a prisoner caught between loyalties to the people she loves.

Determined to find her way back to Khalid before the kingdom is attacked, Shahrzad awakens the powers inside her to attempt to break the curse and unite with her true love once more.

Before I start, I have a question. Is it common that they call each other by their full names so often? I somewhat noticed it in the first book but it this one it stuck out to me every time. Just a (sort of) random question that I would appreciate an answer to.

Now for the story.

There’s no way that I can not point this out. Teymur is a fucking idiot. Trying to rape Shahrzad just because the caliph killed his girlfriend is the most disgusting and thing I’ve ever heard. She had nothing to do with it and the fact that that was the way he wanted to get revenge shows how much of a low life he is.

Alright, I think I’m going to break this down by characters instead the order of the story.

I have to start with Despina. I don’t think you understand how heartbroken I was when I thought that she had really betrayed everyone. Super surprised that her father is the damn Sultan though.

Vikram. Super happy that he didn’t die. I really thought Tariq had killed him. I vaguely remember the thing with the fire so I was semi-surprised when he broke Shahrzad out of jail. However, at that point, I knew that Despina had not betrayed them because he could have easily left sooner.

I can’t say that I have any particular feelings toward Irsa. I get the contrast between the sisters and how she grows and all but I don’t think I agree with the notion that being quite makes you weak.

I knew Rahim was going to die. The way he stepped in front of Tariq after he shot Shahrzad (wasn’t that something!) and when he told Irsa that he was afraid, I knew it would happen.

I can’t say that I’m surprised that Reza gave Shazi to the Sultan. But I am glad that Tariq got him back for it.

I have no respect for Jahandar anymore. For him to claim that the storm that destroyed Rey isn’t his fault is childish. He caused an absurd amount of destruction all because he was power hungry. Then he betrayed on daughter while just leaving the other one behind in the desert without actually knowing where she is. What kind of parent does that? And then he suddenly has an epiphany when Shahrzad has a break down because he stabbed her husband. What in the world? Where did she get the inspiration to write him?

I honestly thought that the beginning of this story was slow but I appreciate a good plot twist and this book had more than one.

I like her writing so far so I’m considering reading The Flame and the Mist duology when she’s finished writing it.