Posted on March 19, 2017 by Bookmark Chronicles 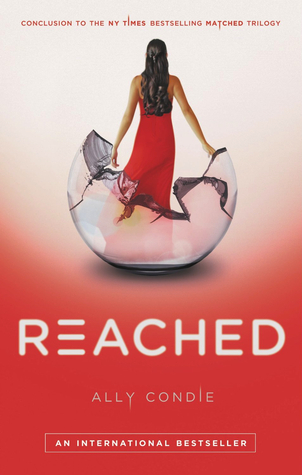 Cassia’s journey began with an error, a momentary glitch in the otherwise perfect façade of the Society. After crossing canyons to break free, she waits, silk and paper smuggled against her skin, ready for the final chapter.

The wait is over.

One young woman has raged against those who threaten to keep away what matters most—family, love, choice. Her quiet revolution is about to explode into full-scale rebellion. With exquisite prose, the emotionally gripping conclusion to the international–bestselling Matched trilogy returns Cassia, Ky, and Xander to the Society to save the one thing they have been denied for so long, the power to choose.

So of course I love having all three perspectives, I love multiple perspectives. Unfortunately, for the first half the only narrative that I cared about was Xander’s. His was the only one that was interesting. I was bored to tears with Cassia and Ky was just kind of there.

Usually in books like this the government is incredibly messed up and this one is no exception. I mean, it’s not Hunger Games cruel, but giving the Plague to people is still cruel.

I do not like Indie. Honestly, she was kind of an irrelevant character. And then it’s pretty ridiculous that she “falls in love” with Xander (despite the fact that she never knew him) and then kisses Ky. It’s also really annoying how often Ky thought about how beautiful she was. Like, I don’t care that he thought it but it happened so often that it was shady for someone who was so in love with another person.

I also felt that there were a lot of things left unresolved at the end, which isn’t good for the conclusion of a series…. Sure Ky and Cassia are back together. Xander falls in love with someone else (who just so happens to be Vick’s fiancee…kinda weird). Cool, but why mention that Matthew Markham was never killed if we don’t know where he is? What the hell happened to Patrick and Aida? What about Em? She was constantly mentioned in the first book as one of Cassia’s best friends so what happened to her after the transition of power?

Aside from the story being boring, I had some issues with Condie’s writing style. I hate the way that in the beginning she’ll mention a snippet of a memory and then when we finally get to the rest of it she runs through the first part again. I get that it’s important for the sake of refreshing the reader’s memory but it’s all the same book and they were long memories.

I also hate the amount of metaphors that she uses, especially the pilot one. The Pilot is the leader of the Rising but Oker is Xander’s personal pilot, Anna is Cassia’s pilot, Anna calls Ky the pilot and the plague is the pilot too. Seriously? That’s so freaking excessive.

As I mentioned in my last review, I also found the constant repetition of poetry to be annoying.

A full series review will be posted soon.