Posted on February 8, 2017 by Bookmark Chronicles 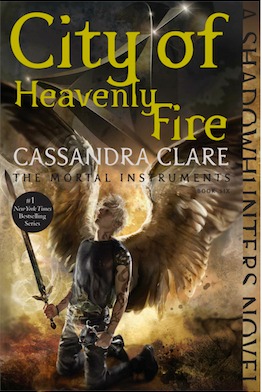 Shadowhunters and demons square off for the final showdown in the spellbinding, seductive conclusion to the #1 New York Times bestselling Mortal Instruments series.

Darkness has descended on the Shadowhunter world. Chaos and destruction overwhelm the Nephilim as Clary, Jace, Simon, and their friends band together to fight the greatest evil they have ever faced: Clary’s own brother. Sebastian Morgenstern is on the move, systematically turning Shadowhunter against Shadowhunter. Bearing the Infernal Cup, he transforms Shadowhunters into creatures of nightmare, tearing apart families and lovers as the ranks of his Endarkened army swell. Nothing in this world can defeat Sebastian—but if they journey to the realm of demons, they just might have a chance…

Lives will be lost, love sacrificed, and the whole world will change. Who will survive the explosive sixth and final installment of the Mortal Instruments series?

So the prologue for this one takes place at the L.A. Institute which is where Emma Carstairs lives. Reading this makes me want to ask more questions but I can’t cause The Dark Artfices series isn’t even complete yet…

Obviously Emma is related to Jem from Infernal Devices, she even has the family sword Cortana.

I don’t plan on reading The Dark Artifices until the series complete. And honestly, I want to read The Last Hours first but the first book doesn’t even come out until next year….

Either way, it was nice to see the new characters for when I do get to it.

I liked the fact that Clary and Emma ended up being kind of close. It was a nice segue into the next series. I am curious though. There were definitely signs that Emma and Julian might fall in love and there was (is?) a law against that.

I have to admit that there were a few surprises in this one. Did not expect Sebastian to be sleeping with the Seelie Queen. Had no idea that we would meet Magnus’s father. Was not expecting (but also appreciated) the brief mention of Jessie from Infernal Devices. AND we found out what made Jem/Brother Zachariah mortal again! Thank you Cassie Clare for answering some of my burning questions.

Along with surprises, there was also a lot of death. Jordan, Maureen, Raphael, Amatis, Meliorn. If I had grown up reading this series I would have been as devastated as I was while ready Deathly Hallows.

I am still so disappointed that we didn’t get more of the Iron Sisters. Although, I didn’t know Luke’s mother was one and I’m pretty sure she was in the last book. Perhaps there will be more about that in one of the next series?

I like that Maia became the pack leader. I always felt somewhat indifferent toward her. I mean, I like her but her story line didn’t really interest me as much as others. But now I appreciate her presence a little more.

I don’t know how it happened but I don’t hate Simon anymore! Now I understand how it was possible for him to become a Shadowhunter. I think I like that because then he and Izzy can get married.

We all knew that Clary and Jace were going to sleep together. Saw that coming from a mile away. But am I the only one that thinks it’s weird that it happened in the demon realm? I also thought that Izzy and Simon would but Alec ruined chances of that happening.e

Also, I’m guessing that in The Dark Artifices that there might be a war between Shadowhunters and Faeries because of their alliance with Sebastian. That would be interesting.

And I called it! I was so glad that Jem and Tessa were together again!

I did really love Jonathan’s (sort of) redemption and Jocelyn being able to have her son. That was a very nice touch.

I have to say now that I am really intrigued about Simon’s journey and the book about Magnus. I may have to squeeze those into my TBR at some point!