Posted on January 16, 2017 by Bookmark Chronicles

City of Glass by Cassandra Clare 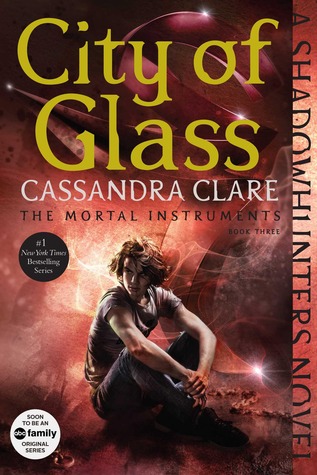 To save her mother’s life, Clary must travel to the City of Glass, the ancestral home of the Shadowhunters — never mind that entering the city without permission is against the Law, and breaking the Law could mean death. To make things worse, she learns that Jace does not want her there, and her best friend, Simon, has been thrown in prison by the Shadowhunters, who are deeply suspicious of a vampire who can withstand sunlight.

As Clary uncovers more about her family’s past, she finds an ally in mysterious Shadowhunter Sebastian. With Valentine mustering the full force of his power to destroy all Shadowhunters forever, their only chance to defeat him is to fight alongside their eternal enemies. But can Downworlders and Shadowhunters put aside their hatred to work together? While Jace realizes exactly how much he’s willing to risk for Clary, can she harness her newfound powers to help save the Glass City — whatever the cost?

QUESTION: Was this originally supposed to be a trilogy? I think it was because the Goodreads description that I found at first said something about this being the final installment and I could totally see it ending this way. I wonder what made her keep going.

This one I think has been the best in the series so far. While I was still able to predict A LOT of what was going to happen it was still pretty good.

Starting with the new Inquisitor….I can’t say that I’m upset that he died if I’m being honest.

I was not expecting the Consul to be on Valentine’s side. I should have figured that out but I just didn’t care for him at all so I didn’t really pay much attention to him. Not mad about his death either.

I like Amatis. I think she redeemed herself from turning her back on her brother and she gave Jace his father’s belongings which was nice.

I did not realize that Camille was the head vampire of the New York clan. And I’m assuming that it is Camille from The Infernal Devices who had a thing with Magnus. Also something is not right about Raphael. I feel like he’s still going to try to come after Simon somehow but we’ll I guess.

I knew Hodge wasn’t dead! I didn’t know The Clave had thrown him in jail though.

I don’t feel that Aline really played a large enough role to have any feelings toward her. However, the fact that Isabelle had to save her from almost getting raped by demon is a part of the reason that I believe that some books need content warnings. There’s absolutely no indication that something like that would happen in this series. Reading that made me sick to my stomach.

Obviously Valentine is an evil son of a bitch but capturing and torturing and angel? And Ithuriel is the angel that was in Tessa’s clockwork angel right? When she touched Will with it, it gave him the Herondale mark? Also, maybe I’m remembering this wrong but wasn’t there something about Jocelyn having a star on her wrist? She’s not a Herondale (and apparently on males get the birthmark) but that would mean that she was in contact with an angel. And, the red necklace that Isabelle has. It’s the one that Magnus gave to Will, who then gave it to Cecily yes?

Anyway, as far as Valentine goes, it’s pretty ironic that he gets killed by Raziel. Well deserved, but also ironic.

Poor Max. I knew that he was going to die but he was one of my favorites. I don’t know why no one believed him when he said he saw someone climbing the demon towers. I feel like that’s too weird a thing to make up even for a nine year old.

Isabelle really annoyed me in this one. I hope there isn’t a love triangle with her Simon and Maia because that would suck. One was enough.

I’m glad that Alec has finally come clean about Magnus. He’s obviously much happier now that he has.

I still hate Simon. I don’t think that will change. Yes, it was brave of him to give himself to Raphael and all that blah blah blah

I’m so glad that Luke finally told Jocelyn the truth. It was obvious that they would end up together eventually.

I was right about Clary and Jace not being related and it’s really nice that they finally know it to. I knew something was off about Sebastian but it wasn’t until Clary got the dye on her hands that I guessed that he was Valentine’s son. I also knew that he was the one with demon blood by the way that Clary talked about his eyes. And then Simon said that his blood tasted like poison so that should have been a red flag. Since his body was not recovered, Im guessing that he will reappear in the future

I’m glad that Clary and Jace can finally be together, I’m interested to see how that goes.I don’t know if Clary should’ve turned down the Seelie Queen though. I understand why but I feel like it might come back to bite her in the ass eventually.

As far as Lyn Lake being the Mortal Glass, I figured that out ages ago. Isn’t it obvious. If Raziel is only holding two? I mean, the other had to be pictured as well….

On to City of Fallen Angels!

7 Responses to Book Review: City of Glass (The Mortal Instruments #3)