Posted on January 6, 2017 by Bookmark Chronicles

City of Ashes by Cassandra Clare 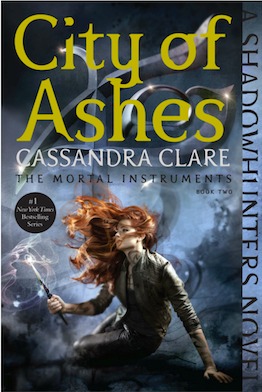 So I have the new edition of this book with the new cover (pictured above) and I’m pissed about it because she included a Foreward that gives away part of the story. Why the hell would you tell me what happens before I get there? WHY?

Also, you know I don’t like faces on my books! But that was the one that cam from Amazon so I didn’t think about it until I got it.

Clary Fray just wishes that her life would go back to normal. But what’s normal when you’re a demon-slaying Shadowhunter, your mother is in a magically induced coma, and you can suddenly see Downworlders like werewolves, vampires, and faeries? If Clary left the world of the Shadowhunters behind, it would mean more time with her best friend, Simon, who’s becoming more than a friend. But the Shadowhunting world isn’t ready to let her go—especially her handsome, infuriating, newfound brother, Jace. And Clary’s only chance to help her mother is to track down rogue Shadowhunter Valentine, who is probably insane, certainly evil—and also her father.

To complicate matters, someone in New York City is murdering Downworlder children. Is Valentine behind the killings—and if he is, what is he trying to do? When the second of the Mortal Instruments, the Soul-Sword, is stolen, the terrifying Inquisitor arrives to investigate and zooms right in on Jace. How can Clary stop Valentine if Jace is willing to betray everything he believes in to help their father?

In this breathtaking sequel to City of Bones, Cassandra Clare lures her readers back into the dark grip of New York City’s Downworld, where love is never safe and power becomes the deadliest temptation.

First, I need something cleared up: Is Hodge dead? Maryse said he was but in the last book Luke said that he only hurt him. Did I miss something?

I have mixed feelings about Maryse. I understand how she could be suspicious of Jace and that she was also trying to protect him at the same time, but I didn’t like the way she treated him. I though it was a bit cruel. I hope we see more of her in the next book though so we’ll see. I also want to know more about her husband since he wasn’t included much in this one. Actually, I want to know about their family in general. I want more about Isabelle. I want to know if Alec will come out to his parents and how things are with Magnus. (This newer addition did include a snippet of Alec and Magnus’s first date so now I think I may have to read The Bane Chronicles)

Inquisitor Herondale was a huge bitch in the beginning. And stupid. You’re the Inquisitor, you shouldn’t be stupid! Also, she’s a Herondale so obviously from Will and Tessa’s bloodline, but isn’t Jace also a descendant of the Herondales? He has the star which is the Herondale mark right? Anyway, I do feel for her about her son. But trying to get revenge on Valentine was all wrong. Also, the Herondales ran the London Institute after Charlotte Branwell appointed Will right? (Not sure if I remember that correctly).

Valentine killing the Silent Brothers was a huge shock. I just didn’t see it coming. The fact that Jace had to watch Brother Jeremiah collapse was pretty brutal.

What happened to Maia when the ship was destroyed? She’s okay I’m guessing so I guess we’ll see.

Jace is still my favorite character at the moment. I was kind of surprised how selfless he was at the end but I guess it was partially because of the fearless rune that Clary gave him. I don’t like the way that it ended though.

For the record, I am 100% convinced that he and Clary are not related and that they will end up together.

In my last review, I mentioned that I hated Simon. I still do. He’s an idiot. When I thought that Valentine had killed him for good, I was indifferent. I figured Clary would be bent up about it for a while but that there would be room for her and Jace without Simon in the way. As far as him breaking up with her, it made me hate him more. I knew that there would be something between him and Maia, that was obvious. But you spent all that time being an asshole about Clary and Jace, bitching at her for “breaking you heart” and then break up with her. Granted, they shouldn’t have been in a relationship in the first place, but still. He just annoys the hell out of me. And I hate love triangles anyway.

Clary still annoys me too. She never pays attention to her surroundings and almost always gets hurt because of it. And how did she not know that Luke was in love with Jocelyn? I thought that was cleared up in the last book when Hodge told her that and when Luke told his story. It’s obvious, so what the hell?

I’m still waiting for some of the pieces to fall together. I know Jocelyn will finally wake up in the next one so I’m interested to see what happens when she meets Jace and if she loves Luke and all that.

City of Glass is next!

3 Responses to Book Review: City of Ashes (The Mortal Instruments #2)