Posted on October 21, 2016 by Bookmark Chronicles

Fun fact: This book was written by one of the first people that I met (virtually) when I started blogging. Check out her blog: Julayn Adams’ Books and Reviews 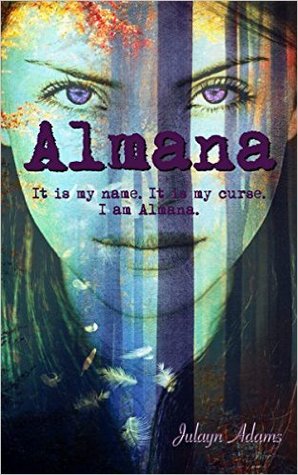 In the aftermath of World War III, the world has become a dangerous place. The ruthless dictator, Equis, and his army, Armageddon, are quickly taking over major metropolitan areas on the west coast of the United States. The end of humanity is imminent. Their one hope lies in the hands of a seventeen-year-old-girl, Alexa. When Almana volunteers to leave Heaven to guide Alexa, she never thought that her own destiny would include falling in love with a human. Now, cursed to remain on Earth forever, Almana finds that her task is much more than she bargained for.

To start, I loved the prologue with the angels and getting ready to send Almana to Earth. I kind of reminded me of the Adjustment Bureau (if you haven’t seen it, it’s a great movie).

I appreciated that Ali and Alexa met very soon after she landed on Earth. Not having a super drawn out info dump in the beginning of a novel is pretty refreshing to be honest.

I really like the characters (the good ones anyway). I like that Ali has a connection with Cam and Doc in addition to Alexa. It makes the whole “becoming a family” thing seem more realistic that way, especially after Cam and Doc find out why Ali is there. I did think that Cam and Ali’s relationship was a bit instalove-ish at first but I guess it’s supposed to be that way because she’s an angel and he’s supposed to be her soulmate. Although, I still really want to know why they smell cinnamon or vanilla when they’re near each other. The first time that Cam saw her wings I was pissed that he was so upset by it. BUT, he got over it pretty quickly so that was good.

I like Joe and Jessica, they’re good supporting characters.

I need answers from Tammy and Timmy. I was kind of surprised when she poisoned Jessica and I knew something crazy would happen when Doc said that there was something off about Timmy. I didn’t expect him to be a murderer though! There’s seriously something wrong with both of them. How on earth did they get away!?

I realized that there had to be a sequel when my Kindle app said that there were only 20 minutes left in the entire book and too many things hadn’t been covered yet. I liked the ending but I still have questions:

Turns out, this will be one of three books (the next titled Vision) so now I’m upset that I read it because I have to wait for the next one….

Anyway, it was a really good read.

Next, I’m trying to decide if I should keep reading Just Listen by Sarah Dessen or start Small Great Things by Jodi Picoult (she’s my favorite author, the book is new, and I just bought it today)! I’ve heard they’re both good so idk!