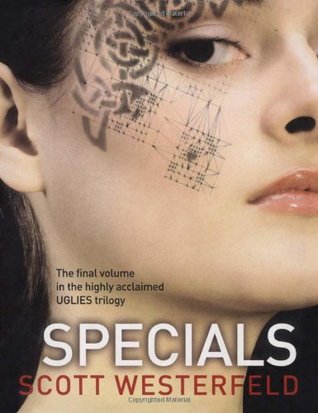 “Special Circumstances”: The words have sent chills down Tally’s spine since her days as a repellent, rebellious ugly. Back then Specials were a sinister rumor — frighteningly beautiful, dangerously strong, breathtakingly fast. Ordinary pretties might live their whole lives without meeting a Special. But Tally’s never been ordinary.

And now she’s been turned into one of them: a superamped fighting machine, engineered to keep the uglies down and the pretties stupid.

The strength, the speed, and the clarity and focus of her thinking feel better than anything Tally can remember. Most of the time. One tiny corner of her heart still remembers something more.

Still, it’s easy to tune that out — until Tally’s offered a chance to stamp out the rebels of the New Smoke permanently. It all comes down to one last choice: listen to that tiny, faint heartbeat, or carry out the mission she’s programmed to complete. Either way, Tally’s world will never be the same.

Starting at the beginning, I did not like how Tally suddenly believed that she and Shay had been seduced by David and that he intentionally ruined their friendship. Maybe that was a part of her having a “special brain” but that idea was completely ridiculous.

After the first few chapters I came to the conclusion that I hated Tally, and now that I’ve finished her story, I stand by that. I agree with Shay when she said that she was incredibly selfish. I also don’t like that she constantly chooses guys over her best friend. While I can kind of she where she is coming from, I can’t really say that I agree that she didn’t always have a choice in some of the things that she did. Yes, she was manipulated quite a bit, but there were other times when the choice was clearly hers and she chose the option that most benefit her personally.

Interesting that Andrew is now like a tour guide for the Smoke. However, I would have liked more information about what’s going on in his village. Are they still doing revenge killings? What’s the latest news since Tally left? Since they’re helping the Smoke, how has the community changed? How does all of this play into the experiment? Then again, I guess it doesn’t really matter because in the end Special Circumstances gets destroyed? These aren’t super important details, but I was curious.

Getting to Diego is pretty much what I’ve been looking for in this series. I love that Tally is finally exposed to something new. She’s been through a lot as a sixteen year old, but it was time for her to see that not everything is one way, not everything is meant to be the same.

I think the nail in the coffin for my views on Tally came from the scene where Zane kisses her. I get that being a Special makes her see him as weak, but she can’t only want him to change and not want to change herself. For her to say that they can only be together if Zane becomes special was bullshit when the alternative could have been that she takes the cure. I get it, she’s that last Special, blah blah blah, and that’s why Dr. Cable saved her (PLOT TWIST!) but still. This is another example of how selfish she really was.

I was very surprised by Zane’s death. I did not see that coming and I feel that it was avoidable. The hospital not being able to send a ping for the doctors is a terrible excuse. I know they were under attack and everything but I just feel like there was something that could have been done ya know?

I also thought that the whole starting a war thing was so unexpected but very like Dr. Cable to do so. She reminds me a lot of Jeanine from the Divergent Series so I wasn’t really that surprised that she knew the truth but started a war anyway.

The rest of my notes are pretty much me bitching about why I don’t like Tally, so I will spare you 🙂 Although the ending was a little weird. Like, she and David are the new Special Circumstances? Just the two of them? And their not going to help anyone? Like what are they gonna do just live in the Ruins and spy on all of the cities? I don’t know, I just wasn’t into it I guess.

I would give this book a 2.5/5 stars. (Feel free to disagree. I know I probably have an unpopular opinion as I usually do lol).

Next I will be reading Extras for which I will write a review and then review the series as a whole.