Hi friends. As you know by now, I have a lot of issues with some of the standards set by society and beauty is probably one of the biggest. A few months ago I did a post called Love Your Body that you can check out by clicking the link. Basically, I will be elaborating/adding to some of the things that I talked about in that post about body image along with how societal standards affect people of different races, genders, etc.

In 2013 the CEO of Abercrombie & Fitch announced that they would stop selling clothes for women who wore sizes above a 10 (US) because he didn’t want overweight people (women really) shopping at the stores. Their reasoning for keeping XL and XXL sizes for men is to appeal to athletes apparently. Supposedly, their goal is to attract “cool, good-looking people.” This is the reason that they “hire good-looking people.” Now, keep in mind that this is the same company who was under fire years ago (around 2003) for not hiring minorities. So not only is this company racially prejudice, they support body shaming.

When the CEO announced the change in sizes, Ellen DeGeneres spoke on the topic and said:

Similarly, a teen called out American Eagle Outfitters for having discrepancies in their sizing. In the photo below she shows two pairs of shorts purchased from the store. One is a size 4 and the other a size 10.

See the problem? At first, she started to wonder if she had gained but then realized that her body was not the problem. Not only is there hardly a difference in the length of the shorts, the waistline is same. Now, I’m no clothing expert but I’m pretty sure that both the length and width are suppose to increase proportionally to reach the correct fit.

In April, Glamour magazine included Amy Schumer in their plus size edition, because she wears between a size 6 and size 8. Plus size in America is actually considered a size 12. Not only were they sending the wrong message to people who read their magazine, creating a “plus size” edition is actually discriminatory itself. Like when America’s Next Top Model had a “plus size season.” While it is great that they supported models that didn’t fit their typical mold, the fact that there is a mold is the problem. It implies that these models aren’t good enough to be featured on the show in any other season.

This movement to support positive body image is not only affecting women. American Eagles was under fire again recently for launching a fake campaign with the hashtag #AerieMen. Aerie, their women’s lingerie segment, is known for recently deciding to stop retouching their female models. While they have also decided to stop retouching their male models, customers were disappointed by the fact that they created #AerieMen as only a parody and accused them of viewing male body positivity as a joke when it is actually a very real issue. Believe it or not, some men struggle with accepting the way that they look when they are surrounded by commercials, billboards, and magazines that constantly display men that look like Channing Tatum and not much else.

Another aspect in the battle against societal beauty standards is the idea that in order to be beautiful, you have to be white. Oh yeah, this is a thing, take a look:

As mentioned in the video, the color that most people have come to know as “nude” does not work for everyone.Luckily, there are some people in the fashion industry who have noticed that this trend needs to come to an end. Naja, a Los Angeles based lingerie company, recently released its “Nude for All” campaign which features seven different shades of nude underwear. 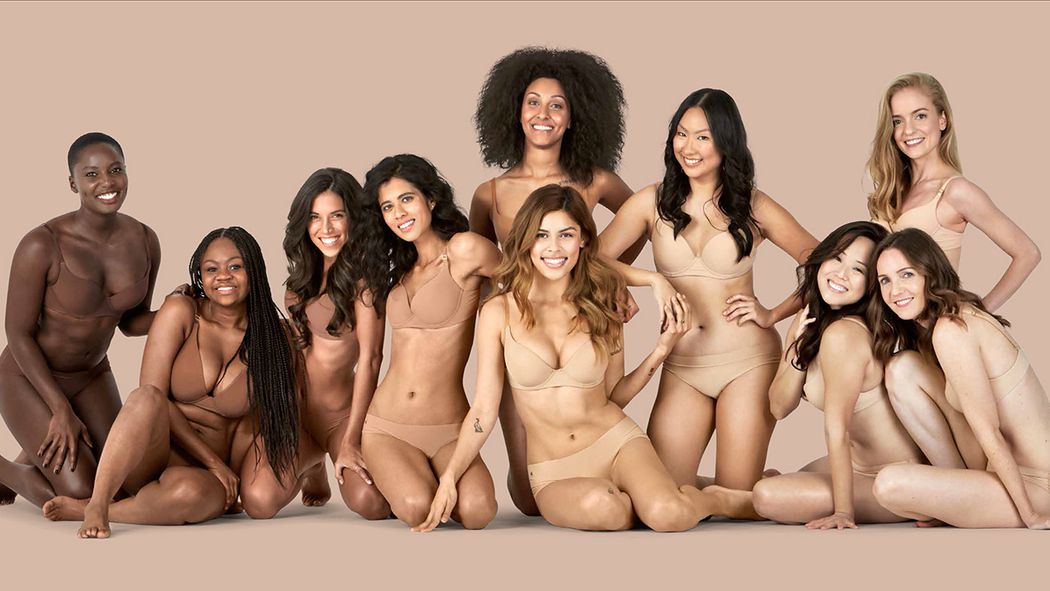 Similarly, Christian Louboutin has also released five different shades of nude pumps in his most popular designs. Acknowledging that he is still missing two of the basic shades, Louboutin is working on extended the line, adding those two other shades and creating more styles.

Things like this is the reason that so many people have issues with their own bodies, develop eating disorders and exhaust themselves believing in something that isn’t attainable. They’re striving for an unrealistic standard set by these companies that tells them that if they don’t fit into these clothes then they are not good enough, not pretty enough, and not small enough. As someone who has struggled with fluctuating weight as a result of a medical condition, I simply tuned out the standards set by society. Of course it was easier said than done, but if you look at most of the standards that are set by society they’re pretty much all bullshit so why listen?