Posted on April 13, 2016 by Bookmark Chronicles

I did a brief post on this before that you can check out here, Now I want to go into a little more detail.

Today, the Women’s Leadership Initiative on campus held a forum on feminism and intersectionality and I loved every second of it so I’ll give you a peek into what we talked about today.

Intersectionality – a concept often used in critical theories to describe the way in which oppressive institutions (racism, sexism, homophobia, transphobia, ableism, xenophobia, classism, etc.) are interconnected and cannot be examined separately from one another.

*side note – half of the words in parenthesis were unrecognized to WordPress. That in itself is a part of the problem, but I digress*

Why is intersectionality within feminism important? It’s simple really. Feminism is meant to support, empower and advocate for women, but women cannot be defined in any one way. We come in all shapes and sizes, and all have unique stories. If you are a feminist that only advocates or cares about the women that look like you, then you need to some research because you’ve clearly got something wrong. If you’re going to advocate for a group then you have to advocate for ALL members of that group, you don’t get to pick and choose. Otherwise, you are excluding people that you claim to want to support.

How can you advocate for all women? The first step is recognizing your own privilege. It’s one thing for a heterosexual, cisgender, upperclass, Christian, able-bodied, white woman in America to say that she is a feminist, but she’s really not unless she advocates for the women that look like her and have the same background, as well as women of color, women in the LGBTQ community, lower/middle class women, women with disabilities, and women that are different from her in any other way. As a member of any majority group it is important to realize that not all women (and men) are treated equally. For example, I am a straight woman, that fact provide comfort for me in certain space. However, I know that friends of mine that are LGBTQ struggle to feel comfortable in those very spaces. I have the privilege of not ever being called out because of my sexuality, gender identity, or gender expression. Being able to recognize that is the first step. Next, I have to speak up. If I ever saw an LGBTQ woman being harassed, I would feel obligated to say something, stand beside her, and stand up for her and with her. Why? Well, first because it’s the right thing to do, but also because no one has the right to tell her that she is less than or make her uncomfortable in her own skin. Also, because as a feminist I believe that women deserve to be treated as equals. How stupid would I sound if I said, “All women should be treated equally, except for her.” Pretty damn stupid right?

It’s also important to note that event two straight white women are not exactly the same. We all, as women, have something about us that makes us stand out. Many of us are taught that we will like pink, wear dresses, find a man, get married, and have babies. WE DON’T HAVE TO! If you we choose to great and if we don’t…still great. We will never all be the same. We have different experiences, different opinions, and different realities. Intersectional Feminism accepts and celebrates that.

I also believe that feminism should advocate for men but that will be another post for another time. Until then, I leave you with this: 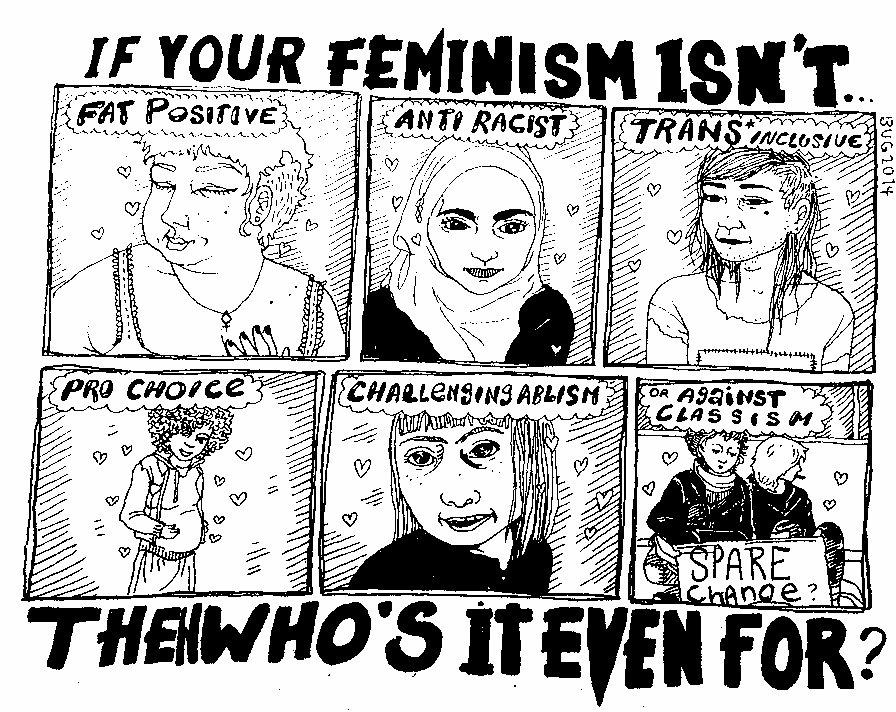